The Pomegranate - Punica granatum, is most often distinguished by the spiny branches, opposite clustered leaves, large showy flowers and very unique fruit.  It occurs in a deciduous shrub or small tree form, with a single short trunk and rounded crown that reaches an average height of only 8-25 feet tall.  The bark is brownish gray with thin smooth bark that becomes rougher with age.   The young twigs are angled at first but become rounded with maturity.  The leaves are simple, opposite, elliptic, oblong and clustered with a narrowly wedged shaped base and a blunt tipped point.  The upper surface of the leaves are a lustrous deep green with a pale underside.  The flowers are bisexual with fused sepals that form a tube, they are fleshy, reddish with 5-9 petals that are red, orange, yellow or white.  The flowers appear in late spring to summer. 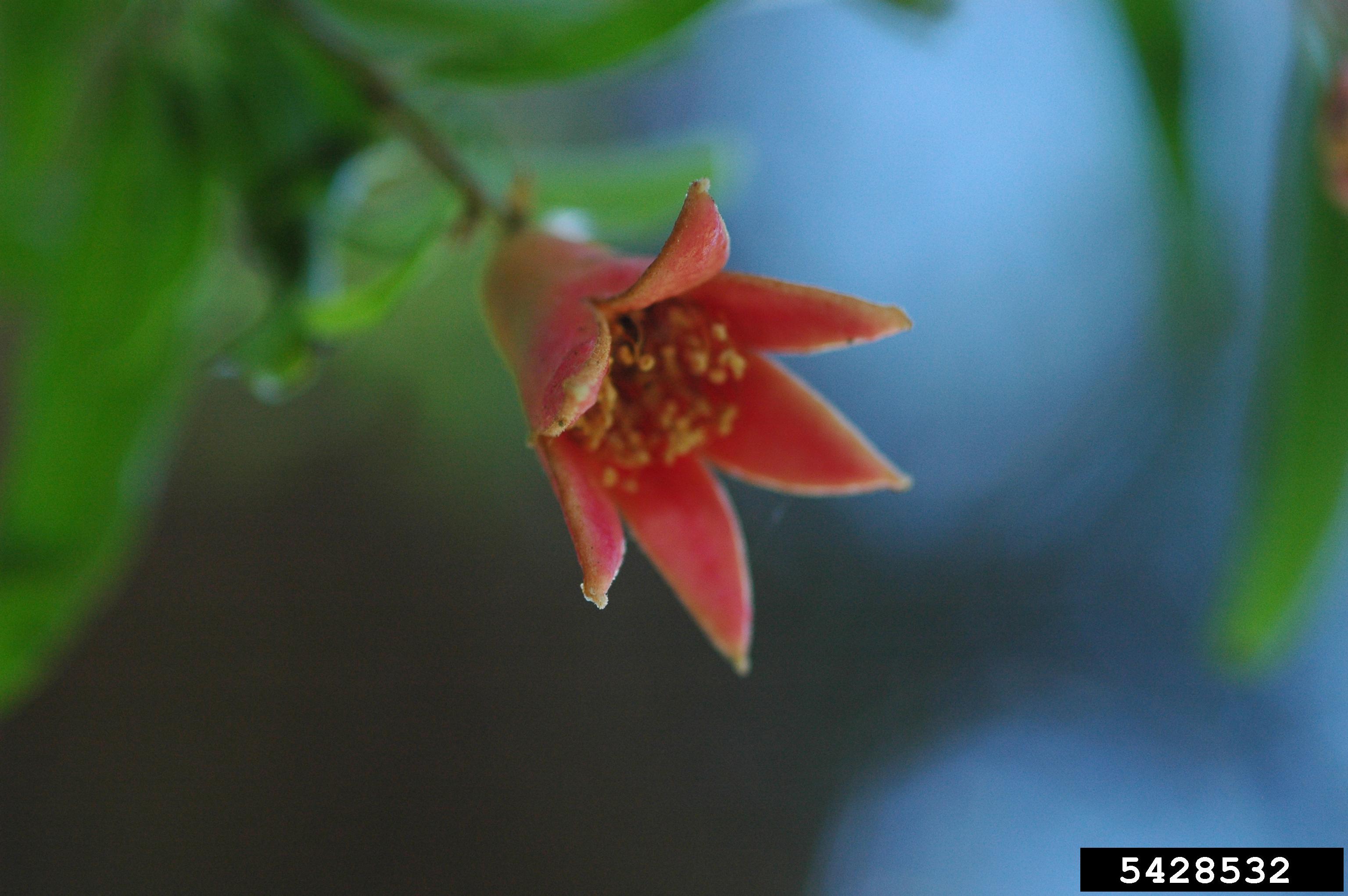 The fruit from the Pomegranate is rounded red, red-yellow, or red-brown with a white leathery berry that is 5-12 cm in diameter.  The fruit matures in the Fall.  Pomegranates are grown for both ornamental and food purposes and have been for centuries, the fruit is even mentioned in both the Bible and Quran.  It is said that the calyx on the fruit was even the inspiration for King Solomon's crown. 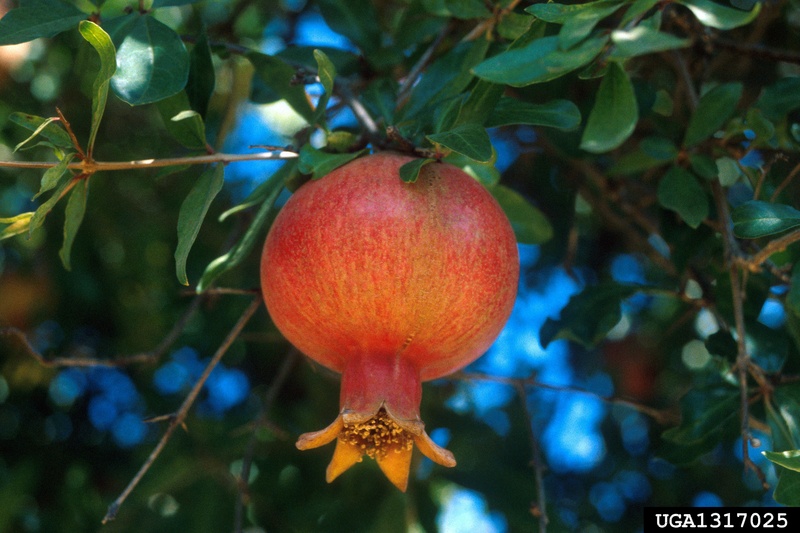 The Pomegranate originated in the region that is known today as Iran and cultivated since ancient times throughout the entire Mediterranean region.  It was introduced to first Spanish America in the late 16th century and later into California and Arizona.  Today it is cultivated and sparingly established in some of the Southern United States from North Carolina to California.  It is also widely cultivated throughout the Middle East, North Africa, tropical portions of Africa, Central Asia, the Mediterranean Basin, and India.  Recently it has begun to appear in European and and the Western Hemisphere. 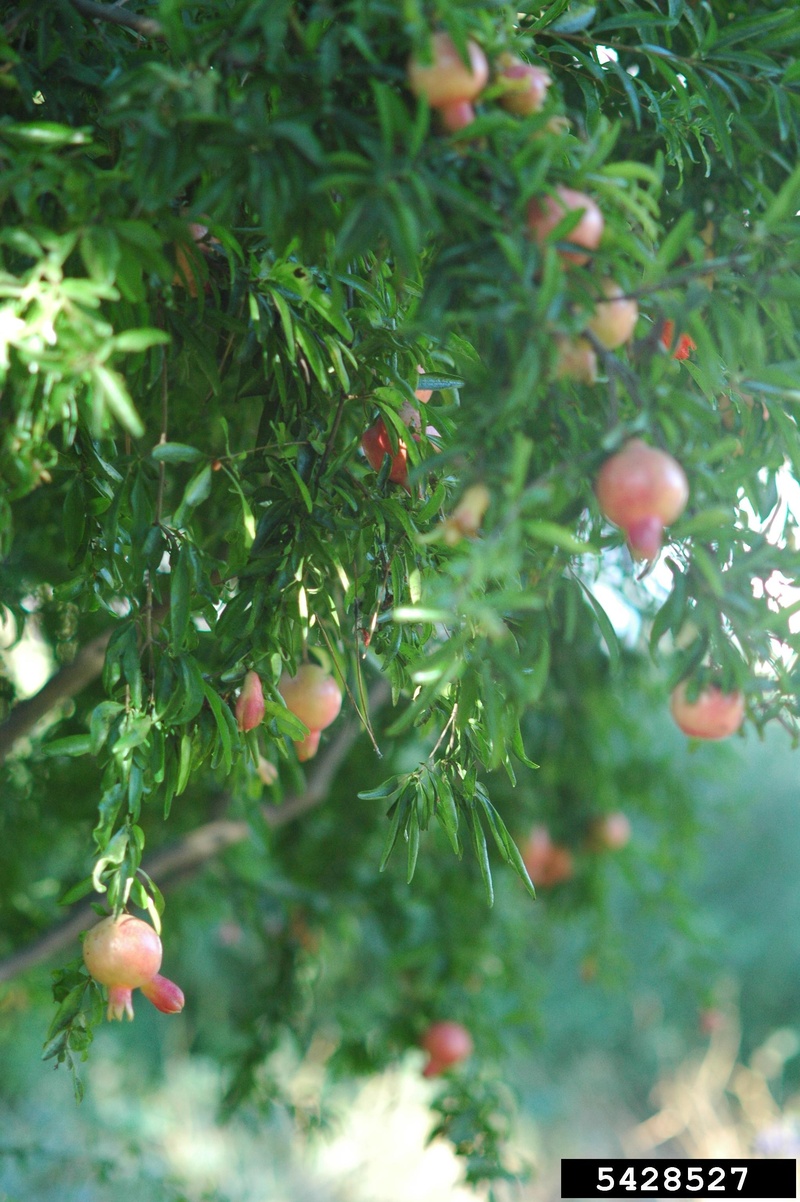 The fruit has been used for centuries in many different cuisines.  It is used for juices, sauces, as a spice (flavoring), or a topping for desserts or soups.  The seeds of the Pomegranate provide 12% of your daily value of Vitamins C, 16% of your value vitamin K and 10% daily value of folate, they are also an excellent source of dietary fiber at 20% of the daily value (this is entirely contained in the edible seeds).

Meet more trees at www.ArundelTreeService.com or follow our blog at www.MeetATree.com

Reply how long does plaquenil stay in your system
1:39 on 15 September, 2021
Efectos Del Viagra A Largo Plazo

Reply torsemide to lasix conversion
0:57 on 18 September, 2021
Discount Pharmacy In Us Online