Shopping Cart
Your Cart is Empty
Quantity:
Subtotal
Taxes
Shipping
Total
There was an error with PayPalClick here to try again

Thank you for your business!You should be receiving an order confirmation from Paypal shortly.Exit Shopping Cart

The Yellowwood State Forest - Nashville Indiana (Where they have Boulders in their trees!)

In the quaint village of Nashville, Indiana near the Brown County State Park lies the Yellowwood State Forest. The Yellowwood State forest was organized in 1940 when federal lands were leased to the state of Indiana, this land was eventually deeded to the state in 1956. Over the years more then 2000 acres of abandoned and eroded lands within the Parks footprint have been planted with various Pines (jack, red, shortleaf, white and scotch), Black Locust, Black Walnut, White and Red Oaks. The Yellowwood Lake which covers 133 acres and is 30 feet deep at it's deepest point was completed in 1939, there are two other lakes within the park though much smaller in size (Bear Lake and Crooked Creek Lake). Over the years the Yellowwood State Forest has increased in size by gaining parcels of land through the Heritage Trust Program. Their are many activities to enjoy while visiting the Park including Fishing (a boat launch is located in the South end of the main lake), Hunting (Whitetail Deer, Ruffed Grouse, Turkey, Squirrel, Fox, Woodcock and Raccoon-valid Indiana Hunting license required), Primitive Camping, Horsemen's Camping (many miles of horse trails within the park), Gold Panning (must have permit), Hiking, Kayak/Canoe Rental and Picnicking. Today the Forest covers 23,326 acres, made up of 17 different areas all located within Brown County. 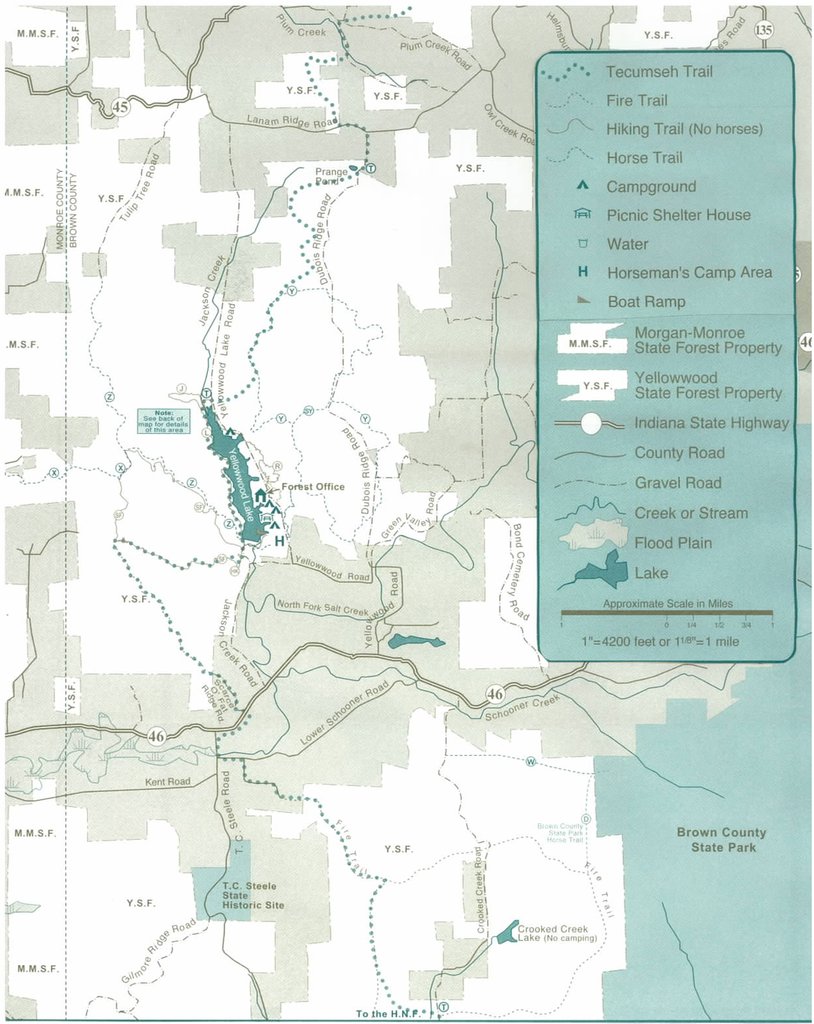 The park was named for a tree common in the mid-south but rare in the area that is found growing in the park. The Yellowwood Tree - Cladrastis kentukea is a medium sized deciduous member of the legume family. With it's smooth elephant grey bark, pendulous fragrant flowers, and red/brown stems it offers beauty to any landscape year round. It is native to the Eastern United States, most notably two very small areas, one runs along the Kentucky and Tennessee border, and the other between Missouri, Arkansas and Oklahoma. It is commonly planted in landscapes from New England south to Washington DC & Virginia. Yellowwood is hardy from zones 4a to 8b and can be purchased from most large nurseries in the Eastern US. The leaves are composed of widely spaced leaflets that are alternate not opposite one another. There are usually 9-11 leaflets per leaf. The leaves are a yellow green in Spring, bright green by Summer and then Yellow in the Fall. The wood of this tree contains a Yellow dye which stains the heartwood, hence the name Yellowwood. The flowers of the Yellowwood are very similar to Wisteria, they grow in a pendulous form and feature white fragrant flowers. The flowers are small and grow on open panicles ranging from 10-15 inches long. They are considered to be highly fragrant and appear in May. The flowers give way to long brown seed pods as the Spring Summer season changes. When mature this tree can reach heights of 30-50 feet and a spread of 40-55 feet wide. It is considered to be virtually pest free and quite hardy in it's native range. This tree is easily transplanted in B&B or bare root up to 2 inches in caliper. The Society of Municipal Arborist's named this tree the "2015 Urban Tree Of The Year", this selection was made based on it's adaptability and strong ornamental traits. Within the park there are less than 200 acres that can support the Yellowwood tree, these can be found on North facing slopes and deep ravines near Crooked Creek Lake. A specimen can also be found planted at the Forest Office on Yellowwood Lake Road.

Within the Yellowwood Forest there are some unique features. One of which is the Tecumseh Trail, named in honor of the Shawnee Chief who in the early 1800's attempted to ally several smaller tribes into one large confederacy. The trail spans the native lands of these tribes and has 5 trail heads within the forest. The trail covers various types of terrain and offers beautiful views of the Forest and Lakes. The second and most unusual is the 4 large sandstone boulders that are found not on the ground but in the canopies of Oak trees. It is said that the first boulder was originally discovered by a hunter and three more were discovered by hikers. The largest sandstone slab is 4 foot by 1 foot and thought to weigh as much as 400 lbs. Theories the boulders in trees phenomena range from natural things such as flooding or a tornado to the more extreme (or maybe unbelievable) including UFO's, Acoustic Levitation (where a rock becomes weightless), or even a good old Fraternity Prankster using heavy machinery, we may never know! No evidence of disturbance was found at any of the tree locations that would support the heavy machinery or tornado theories. 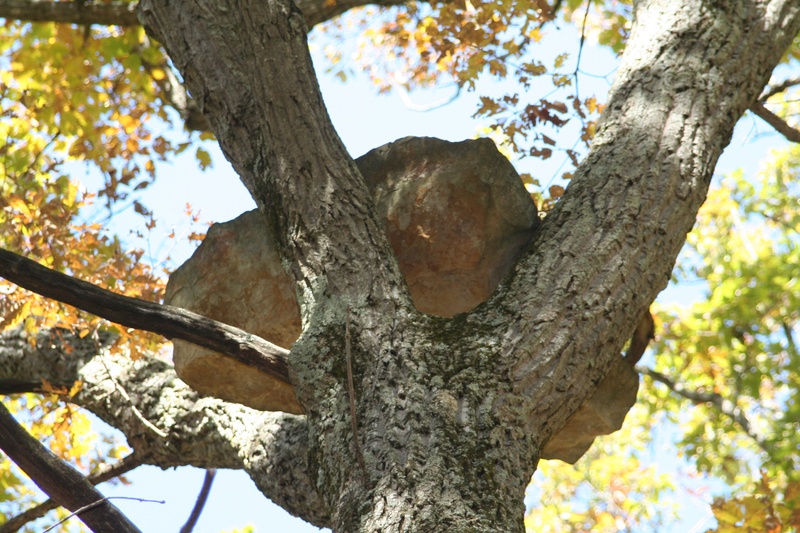 You can find the Yellowwood State Forest at:

Reply generic cialis no prescription
5:55 on 7 September, 2021
Glucophage No Perscriptionpharmacy